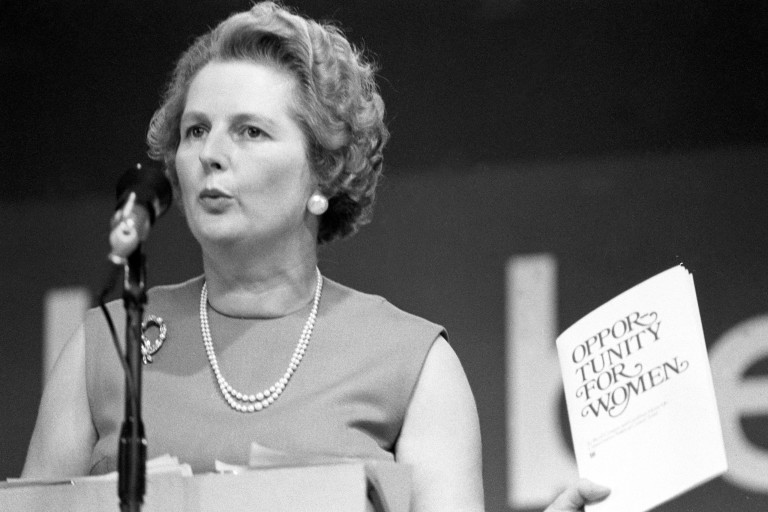 If you think the world is a mess now, that just means you weren’t around in the 1970s.

In Britain, where I grew up, the low point was known as “the winter of discontent,” a line borrowed from Shakespeare’s Richard III.

The inflation rate in 1975 was 27 percent. The trains were always late. The payphones were always broken. Nothing worked.

It felt as if there was no way back. And then came Margaret Thatcher.

Between May 1979, when she entered 10 Downing Street as prime minister, and November 1990, when she stepped down, she changed everything.

Born on October 13, 1925, she was an improbable savior. Nothing in her middle-class childhood suggested the future ahead of her. A diligent student, she got into Oxford as a chemistry major. She worked for a small plastics company after leaving college but was rejected for a position at the British chemical giant ICI because, as the personnel report stated, “This woman is headstrong, obstinate and dangerously self-opinionated.”

She needed all three of those attributes when she entered the world of politics as a Conservative candidate in 1950. After several failures, she finally entered Parliament in 1959. For the next two decades, she steadily worked her way up through the party ranks.

As early as 1975, Thatcher had come up with a wonderful line about the opposition Labour Party: “They’ve got the usual Socialist disease—they’ve run out of other people’s money.” This she contrasted memorably with what she called “the British inheritance”: “A man’s right to work as he will, to spend what he earns, to own property, to have the state as servant and not as master …”

This was the essence of Thatcherism, and it was just the tonic that the patient—the British economy—needed. It’s fashionable nowadays to argue that there was no Thatcher miracle in the 1980s. Not only is that demonstrably false, it misses an essential point: Thatcherism wasn’t just about raising productivity or creating jobs. Just as important was the goal of defeating inflation and restoring prosperity to the middle class. This it emphatically achieved.

Yet the event that, more than any other, defined Margaret Thatcher’s premiership was not economic but military. The Falklands War against Argentina established her irrevocably in the public mind as the new Britannia, a warrior queen who gloried in victory. And, of course, it ensured a Conservative win in the 1983 election.

There is no question that sending the Royal Navy Task Force to the South Atlantic took great political courage. Many in her own party pushed for a negotiated settlement. But the lady was not for turning—not because she was nostalgic for the days of empire, but because the invasion was, to her mind, morally and legally wrong.

Not without reason did a Soviet magazine nickname Thatcher “the Iron Lady.” Along with her ideological soulmate, US President Ronald Reagan, she was unhesitating in her opposition to the Soviet Union. When the Soviets deployed intermediate range nuclear missiles in Eastern Europe, she fully supported—despite fierce opposition—Reagan’s counter-move to send American cruise and Pershing missiles to Western Europe.

“I can’t bear Britain in decline,” she told a BBC interviewer in April 1979. “I just can’t.” Nor could we. For much of the 1970s, that decline had looked irreversible. Yet Margaret Thatcher stopped the rot. She cured the economy of the disease of inflation and industrial unrest. She revived the idea of a property-owning democracy. And, with her courageous and principled foreign policy, she restored Britain’s standing in the world.

Those of us who stood by her are entitled to feel proud that we were on history’s winning side. But we should have no illusions about the humble supporting roles we played. She was the leader, proof that sometimes it really is a single individual who can change the course of history—in Margaret Thatcher’s case, decidedly for the better.

Who Does the Media Most Want to Silence?

Why You Should Be a Nationalist

If You Live in Freedom, Thank the British Empire

Why the West Won

The Beatles' Ringo Starr: Brexit Is Good for Britain

The Suicide of Europe

The Market Will Set You Free

Reagan: Get Government Out of the Way

Government: Is it Ever Big Enough?

Churchill: The Man Who Saved the Free World

Capitalism or Socialism: Which One Is More Democratic?

If You Hate Poverty, You Should Love Capitalism

Is Fascism Right or Left?

Will Witt Asks Americans About Brexit and the European Union